Digital pictures put an end to the ubiquitous film processing kiosks and strip mall stores.  Now smartphones are doing away with digital cameras ("experts say"). While contemplating the vagaries of why I never have my camera when my 5 megapixel phone camera won't do, I remembered the heyday of Fotomat.

They weren't all bulldozed.  And the Libyans didn't plow into all of them, either.  Some have new life as caffeine filling stations. 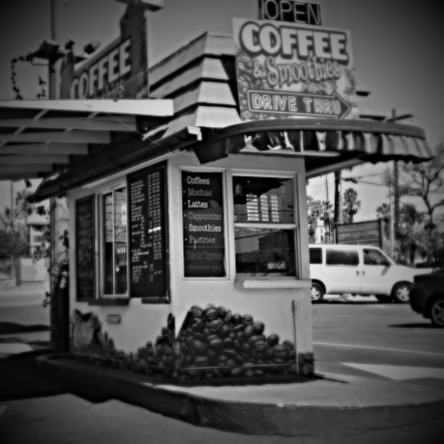 Employee: The flap wheel on the big pedestal grinder is no good.

Me: Ooh. Did it disintegrate on you?

Employee: No. There's no grit on it.

Scene: At the pedestal grinder.

Me: Okay, here's what I need you to do.  Take the flap wheel off and bring it to me in my office.

Employee: Okay.  Do we have a good one?

Me: Just bring it to me in my office.

Me: You have the bad flap wheel?

Employee: Um, it was installed backwards.

If you spin it the wrong way, all that hits the work is the BACK of the sandpaper! Stop Everything! The System Has Encountered An Unexpected Error! 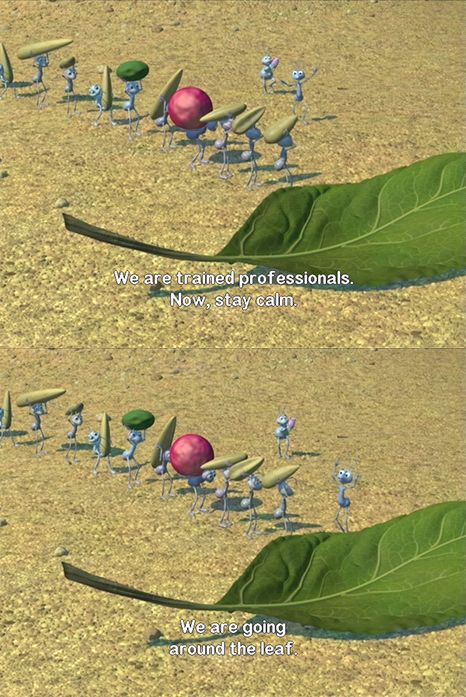 Labels: bug's life, pocketa, that's why they call it work

Samuel Biagetti has an undergraduate degree from Brown; a PhD. in History from Columbia; is a "Museum Scholar" at the Museum of the City of New York; is currently a lecturer at Barnard College; has a podcast -- "Historiansplaining: A Historian Tells You Why Everything You Know Is Wrong;" and has read his Dickens carefully.  (That's a lot to know about someone I don't really know. Life in the 21st Century.)  Mr. Biagetti wrote an article I bumped into online.  His article starts out with the Veneerings -- the young affluent couple in Charles Dickens' Our Mutual Friend -- then creates a hypothetical couple as a 21st Century correlate to the Veneerings.

That class has not disappeared, but has grown and evolved into the white-collar professional and managerial elite that sets the general tone of political and intellectual life in the West.
Suppose for the moment that our young couple of today, roughly parallel to the Veneerings (we will call them, in accordance with the forced informality of modern workplaces, by their first names), Jennifer and Jason, are members of the upper middle class, living off their smarts and social connections rather than manual work.


[If you have time for long-form text, you might try to read the whole enjoyable article.]

In the 152 years since Our Mutual Friend, the class has not only evolved away from a certain method of elaborate dining, but also from the furniture that named the shallow socialites in the novel.

Let us further entertain the idea that in our time as in Dickens’, life imitates furniture, and that we will learn something about our young couple if we consider where they house their underwear. If we picture Jennifer and Jason’s bedroom, it is not hard to guess what we would see there: a good deal of IKEA.


A consideration of the deeper meaning of Particle Board follows. Then the Solid Gold Quote:

For Jennifer and Jason, cuisines, musical styles, meditative practices, and other long-developed customs are not threads in a comprehensive or enduring way of life, but accessories like cheap sunglasses, to be casually picked up and discarded from day to day. Unmoored, undefined, and unaware of any other way of being, Jennifer and Jason are no one. They are the living equivalents of the particle board that makes up the IKEA dressers and IKEA nightstands next to their IKEA beds. In short, they are IKEA humans.


IKEA Humans.  Wow.  Not just shallow veneer.  A relatively disoriented syncretism of post-post-modern lifestyle, fashion, art, music, everything covered with the thinnest possible suggestion of grain. It gets darker:

The truth is that one cannot escape being an IKEA human, any more than an IKEA dresser can change what it is. The question is only what one makes of the situation. . . .
The most venal and self-centered rise to the top; sociopaths are champions. The IKEA personality — cheeky, smug, and capricious, concealing a narcissistic quest for status —is the best adapted to the times.

Then comes the seminar question: "Can the trend reverse?"  This is at about halfway through the article. What follows is some liberal soul-searching and "historiansplaining" that develops unfortunately nothing more than an IKEA conclusion:

. . . A strong and enduring civilization requires citizens willing to state their core principles and to argue openly for their vision of the good society. That entails a frank and honest contest over how power and resources should be allocated in our world. Some, of course, will opt to pursue naked self-interest – in which case, let them be unmasked for all to see. The rest of us must aspire to be citizens before we can then claim to be fully human.

I'm afraid that beneath it all, the second half of the article decodes as the lament of a sad liberal who realizes he is spiritually IKEA in spite of the fact that apparently he is co-owner of a high-end antiques retail establishment.  But at least there is a pro-free-speech pitch there in the "to state their core principles and to argue openly" part.  But the idea that self-interest is somehow the evil that will be unmasked gives away the hopelessly up-ended nature of the world view. I'm pretty sure the writers of the Declaration of Independence and the Constitution saw the ideal of self-governance as being worked out by fully-human individuals and for the benefit of individuals, not for the benefit of "society" much less a "vision of the good society."  I hope I am not being overly libertarian at the same time that I hope I am not being insufficiently subsidiarist when I say that Biagetti has it upside-down somehow.  The individual who is integrally human is the key to good in society.  (Grace makes it easier.)

But I liked the IKEA People image.

People who don't trust you are not to be trusted 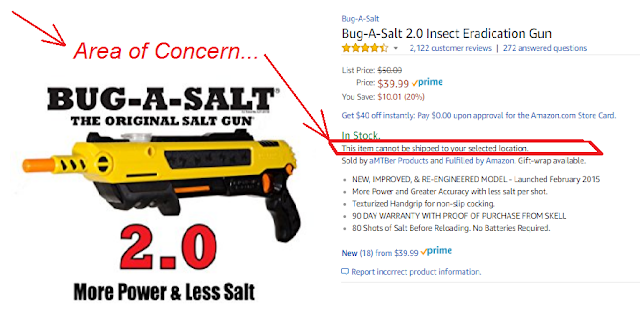 This item is a cross between a super-soaker and a fly-swatter. It shoots a small quantity of table salt to down pesky flies.

The highlighted text says, "This item cannot be shipped to your selected location."

That location would be, of course, California.

Note that Amazon does not sell guns.  Not real guns.  Never did.

So somebody (*cough*kamalaharris*cough*) must have put the kibosh on wing-shooting musca domestica, for their own nefarious reasons.

[Edit, 20 September 2017:  Apparently it is just an Amazon ban.  Californians can order direct from the manufacturer.  I could even get one from the local ACE Hardware. So, 'sup wi'dat, Amazon? ]

At about 10:00 PM Pacific Daylight Time on 5 September 2017, the Mirror newspaper website in the United Kingdom published a story that seems to include the 185MPH figure reported from one (1) reporting station (anemometer?) on the island of St. Martin.  I include the link strictly for archival interest; the site itself is slow loading chum bait. Since then it's been all Biggest Hurricane EVAH!!! from every mainstream legacy news source.  From -- as far as I can tell -- one report.

For one thing, "sustained" wind speed, in the hurricane business, is defined as "measured for one minute or more."  That filters out instrument static.  But somehow "sustained" reported wind speed has turned into reports that basically the wind speed everywhere within Hurricane Irma has been 185 Miles Per Hour for more than sixteen hours as of this writing.

For another thing, One. Reporting. Station.  Even if a St. Martin anemometer read 185 MPH for one minute or more, and even if it was an accurate instrument, it might have been based on location -- a canyon, a rise in ground, or urban architecture can funnel air to cause an increase in velocity.

Another thing.  I've been looking at the beautiful and mesmerizing wind earth at  https://earth.nullschool.net/  and I have only been able to see wind speeds up to around 160 KILOMETERS per hour -- or a hundred miles an hour.  That's still strong wind.  But not historic, breaking all the records strong.  Irma is probably a normal hurricane.  You would expect a hundred miles an hour out of a cyclonic weather system of that size and pressure gradient.

I am not a meteorologist, and do not play one on television.  No, don't click that link.  Let's just say that I could never compete in today's broadcast media.  Leave it at that.

But still.  One Report.  One Instrument reporting.  Possibly for One Minute.  And MPH vs. KPH.  And it looks like that's how fake news turns into something everybody knows (but that just ain't so).

Comparing Self to Others

"Comparison is the thief of joy."  This quote is variously attributed on the internet to Mark Twain, Dwight Edwards, even Theodore Roosevelt.  Maybe those authors did say it, or something very like it.  But maybe they were all paraphrasing some other more arcane quote.

How often do we read something that gets filed in the memory in the form of a paraphrase?

Many educated people, civil war generals and others  habitually and continually have read their Marcus Aurelius.  In the Meditations, they encounter quotes like this:


Now much time and leisure doth he gain, who is not curious to know what his neighbor hath said, or hath done, or hath attempted, but only what he doth himself, that it may be just and holy? or to express it in Agathos' words, Not to look about upon the evil conditions of others, but to run on straight in the line, without any loose and extravagant agitation. (Marcus Aurelius, Meditations, Number XV)

(No I don't know who Agathos is.) A number of editions of the Meditations are still in print.  The classical stoic may be an accessible handle on life for people in business and politics.  I would rather have them all reading old Marcus than old Marx, to tell you the truth.

To return to our quote about the thief of joy.  What is more precious than time? What is more pernicious than someone or something that robs us of valuable time? While Marcus Aurelius made the comment positive with respect to time and negative about comparing or curiosity, the succinct aphorism attributed without documentary citation of attribution turns it into a positive about curiosity (comparison) and negative (a thief) about joy/time/value.

Viva Marcus (Aurelius) and Mark (Twain)!  Oh, and down with Marx.