On 26 February 1968, the city of Hue in Vietnam was declared secure by allied pro-democracy forces after nearly a month of the communist  “Tet Offensive.”  The communist defeat also came the day before Walter Cronkite blandly declared, “We are mired in stalemate.”

The United States military won the war in Vietnam by prevailing against communist aggression in every campaign. President Nixon in 1973 negotiated an honorable treaty from a position of strength, and handed the peace to the citizens of that Vietnam, with the understanding that the United States would stand with them against communism, including ongoing supply of material aid.  The funding for that material aid was yanked like a rug from under the feet of the people of Vietnam by the Democrats in Congress.  A downward spiral ended with the communist 1975 spring offensive and the fall of Saigon 30 April 1975.

It wasn’t my fault — I wasn’t even voting age yet.

About 40 years ago I had an accident with a power tool.  An immortal and infallible teenager working for a general contractor who did home remodels, I got into a shoving match with a bottom-of-the-line Skil brand 6" circular saw.  The dull blade bound up, kicked back, bounced off my torso, and back into my left hand.  This was going to require stitches.

As it turned out, no tendons or bones had been terribly damaged.  Many stitches and many years later, it's good as new, plus the added features of having a Wizard Grade lightning-shaped scar on the second knuckle of my left thumb, plus the ability to predict rain 36 hours in advance.  (Don't ask me how it works, but I can feel it.)

But here's what I want to focus on today:  on the way to the Emergency Clinic, the bleeding stopped.

In a battle between skin and steel, skin always loses.  Blood will flow.  But the instant the bleeding starts, it also starts to stop.  At least the body attempts to stop the loss of blood.  Clotting agents being present in sufficient number, and absent high pressure arterial bleeding, the bleeding will stop.

Here's the point.  One platelet cannot stop the bleeding.  But a whole bunch can.  At least they can do their microscopic damnedest to stop it.

What I'm really talking about is Gun Control.

What good can one platelet do when the bleeding starts?

We The People act in unison to defend as well as originally to create these United States.  And yes the fact that the people are free to keep and bear firearms is important every day, whether called into action  or not.  Only by being extremely numerous and widely spread can the body politic be adequately protected by these platelets of freedom.
Posted by Crowndot at 2/25/2013 04:32:00 PM No comments:

When I was growing up, the center of the house and the center of family life was the kitchen.  My mother's spotless kitchen held many secrets.  Under the oven, in the back of the cupboard, behind the electric griddle that hardly ever got used, there used to be a clean tin from a canned ham.

The canned ham tin was used twice a year from about 1965 through 1975.  One use was as a cake pan for the Easter Egg Cake.  Wow.  Well, it's just that shape.  But it also served to make two halves of the Valentine's Day Cake.

The Valentine Cake required two bakings of a size that would have fit into a normal round 9" cake pan.   Thinking of the project with the big ends of the resulting cakes in the up position, and a section having been cut by means of a straight line off of the lower right of the left-hand one and the lower left of the right hand one, the two cakes could be joined into one at that straight line to create a passable Valentine shape.

Chocolate with pink vanilla frosting.  (That's the answer to the question I know you were about to ask.)

What's that you say?  What happens to the parts that were cut off? 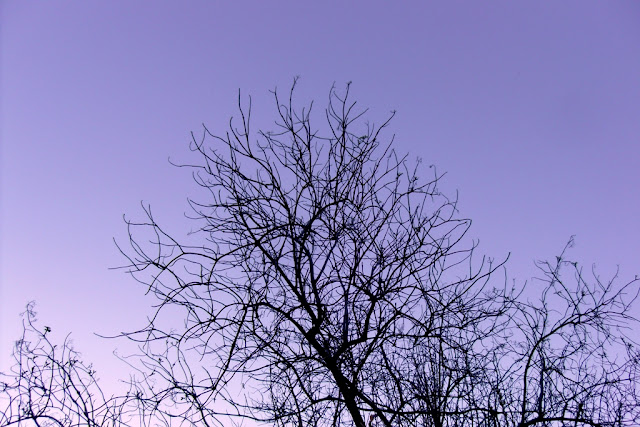 Bare elderberry
Branches reaching to the sky
The violet sky;
Winter wind has stripped the leaves
But -- ah -- soon new leaves will come.

This is not a food blog - Chinese New Year edition

Saturday's dinner, in honor of the New Year of the Snake!  I had never really attempted to express myself in meatloaf before... 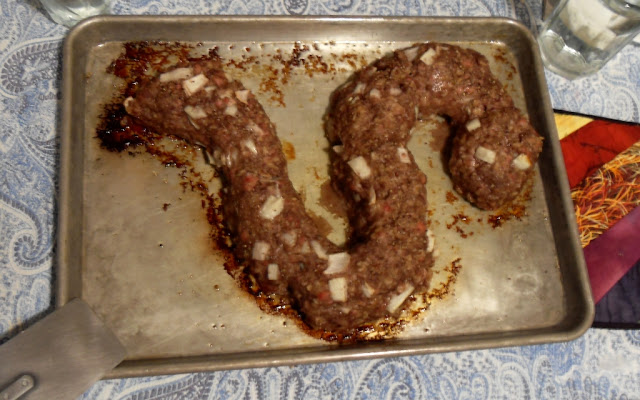 And the finished product. This was about 1-1/2 lbs. of 80% lean ground beef, and a can of Spam, and a big onion, and salt and pepper.  No egg, but it adhered pretty well.

The Kid-Pidgin expression Olly Olly Oxen Free  from the ancient game of Hide-and-Go-Seek is etymologically derived from the mid-second-millennium "All Ye, All Ye Outs In Free" and means that all of you who are still hiding may now come back to base without any penalties or repercussions.

Seriously?  I understand that out here on the Left Coast "our" team lost.  But the topic of conversation?  On Wednesday?  Is still?  The commercials?

Not all the commercials.  Nobody out here in Bluest-of-Blue-States California has come in to the parts counter talking about the Dodge truck ("And so God made a farmer") commercial.  Everybody seems to want to talk about GoDaddy.  Which I guess is the point of advertising.  Days later guys are still wanting to act all Pre-teen about Eeew! Kissing!

So much chatter that I had to watch it on YouTube.  The TV version was cute.  The "unrated" Internet version was a little too weird for me.  (Teh Frenchin, ur doin it wrong!)

So what's the big deal?  The sound?  Well yeah, the sound.  It doesn't sound like mouth smacking to me.  It sounds like somebody washing their hands.  With lots of soap.  But seriously, what's the big deal again?  A sound that accompanies video of kissing grosses you out?

I have to confess ignorance about American television, since I haven't had TV for about 30 years, but don't they have, like, boobs and stuff on TV nowadays?  Didn't I read that they have full frontal female nudity except that it's not really real full nudity since the actress is wearing like a v-jay toupee or something?  And a commercial about kissing grosses you out?

Why is this even a topic of conversation?  Internet registration and hosting services are in a category of interest only to a tiny fraction of the n-Million humans viewing the commercial.  I would have thought the commercial would have gone in one eye and out the other with nary a blip on the neuron meter.  What's the big deal?

Is it Bob Parsons, GoDaddy founder?  He is a United States Marine Corps veteran.  A hunter.  Ergo, somebody Blue-Staters would love to hate.  Semper Fi, Bob, but I don't think you're the big deal here.

I think the big deal is Walter.

We live in a society that idolizes wealth, health, youth, and beauty.  Walter's got youth.  Maybe.  He's got a fat neck, frizzy hair, pallid skin, poor eyesight, a geek brain, and...

Walter's got the girl.

Without preliminary,  without having to be "the brain" part of a team in an adventure movie, without smooth talk, Walter gets the kiss.

Imbolc (say it "ih-molg") is the astronomical cross-quarter between the Winter Solstice and the Spring Equinox.  In Ireland it is called St. Brigid's day -- St. Brigit of Kildare, that is.

My ancient ancestors divided each golden year into "pieces of eight", as it were.  They marked and celebrated the ongoing life and the cycle of the seasons.  Don't put too much stock in self-styled neo-pagan (read "Victorian") trappings draped on solid archaeo-astronomy.
In 2013, the spring cross-quarter actually occurs 3 February at 15:57 UTC.  Its actual date varies because of the vagaries our leap-year calendar.

As a result, celebration of the cross-quarter varies by culture.  In Ireland, St. Brigid's day is the First of February.  In Asia, the new moon following the spring cross-quarter is the start of the new year (e.g., Tet in Vietnam).

At our house, we celebrate the cross-quarter on Groundhog Day.  After all, the cross-quarter is the original reason for the hooplah this morning in Punxsutawney, Pennsylvania, USA.
Posted by Crowndot at 2/02/2013 09:22:00 AM No comments: