Whose life is worthless? 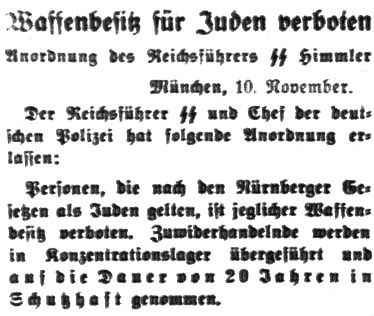 This is a newspaper clipping from Germany, "Völkische Beobachter", Nov. 10, 1938.

The SS Reichsführer and German Police Chief has issued the following Order:

Persons who, according to the Nürnberg law, are regarded as Jews, are forbidden to possess any weapon. Violators will be condemned to a concentration camp and imprisoned for a period of up to 20 years.


Never forget how that turned out.

So the question is, who gets to say what kind of life preserver you get to have?