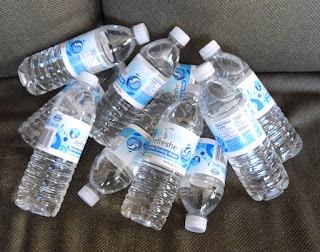 I was going to tape these ten bottles of water together and strap them on around my middle as a graphic representation of carrying around "a little extra weight."  (But that was too much work.)

They seemed pretty heavy when I carried them into the living room for the photo.

So here's the question:
Why should I carry that much weight around under my skin all day every day?  Why would I want to burden myself with those "few extra pounds" every time I go running?

Ten extra pounds may not seem like a lot to some people.  But I can remember how I felt several years ago, when I was running more, and feeling better, and feeling happier.

Right now (14 November 2012) I am ten pounds lighter than I was in February 2011.  Twenty-one months of taking the steps toward better health and overcoming the obstacles that kept me on the couch.  Doctor appointments.  Hernia surgery.  Recovery from surgery.  Dealing with work during the recovery.  Starting to exercise (walk) more.  Starting the Couch-to-5K program (again).  Running again.  Running a 5K race last February.  Finishing a 15K race in September.  Occasionally choosing the healthier snack (or no snack).  Learning to believe in myself some more again.  I feel pretty good about all that.

Anyway.  I am still about 6 pounds heavier than I was six years ago.  We'll see where it goes from here.  As the running miles add up, and the lifestyle evens out, maybe I'll be lighter, stronger, faster.