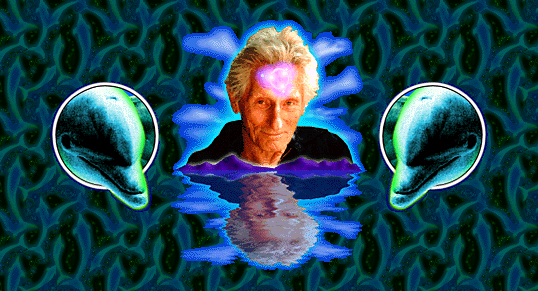 John Cunningham Lilly was born on this day, 6 January 1915.

He started out as a scientist.  He ended up as a brain-damaged nutcase with a legacy.

Having graduated from the California Institute of Technology in 1938, Lilly was at first a productive member of society.  Apparently during World War II he researched the physiology of high-altitude flight, and helped development of gas pressure measurement instruments.

After the war, something must have happened.  He focused on theory of consciousness and moved from medicine to psychiatry and psychoanalysis.  Before long he was dropping acid and once the LSD made him believe he had something BIG to offer the world... Well, the rest is history, as they say.

Lilly is the guy who developed the sensory deprivation tank.

Lilly dropped acid and spent time in a water tank with dolphins.  You read that right.  He formed a strong belief that cetaceans were sentient, even hyper-intelligent.  Yes, that belief is based not on science but on the crazed hallucinations of a drug abuser.


"In the early 1960s, Lilly was introduced to psychedelic drugs such as LSD and (later) ketamine and began a series of experiments in which he ingested a psychedelic drug either in an isolation tank or in the company of dolphins."

That is one of the weirdest sentences I have ever read in all of Wikipedia.

The dolphin thing was the strangest of a lot of strange things this guy got mixed up with.  That's saying something -- he hung out with people like Allen Ginsberg and Timothy Leary.

He was into things like the SETI project and theory of Artificial Intelligence.  And perpetual motion, for all I know.

Anyway, Lilly left a widespread legacy of crap that gets repeated so many times people accept it as true.  So in the consciousness of the herd, if not of individual man, perhaps his relativistic philosophy is "true" in that it has become true (accepted) by the uninquisitive.

[The picture above is from what appears to be either an official Lilly site or a fan site.  Information in this article is from there or from Wikipedia.  I am glad to have the writing of this article off my to-do list.  This has been one of the creepiest things I have ever read up on.  I will now go find some holy water to sprinkle on myself and my laptop.]