I am glad Bing.com changed their uncial to the folded cardboard with a hovering hawk in the middle.  Now I won't click Bing when I want Blogspot.

I am the one who is unreasonable?

One annoying thing is that my industrial vendors' web sites are still all gaga over social media.  Somebody in a Dilbert-style world steps out of a manager meeting and says, "Our competition is on FaceTweet!  We need some of that FaceTweet social stuff too!  Get to work on that, Snodgrass!  I want to see World Wide Wickets on FaceTweet by end of month!  While you're at it, see if you can get some of our product videos on SelfTube!  Then use that new electronic mail thing to send it to all our prospects, you hear me?"

But, alas!  The annoyance, it grows.  As the earth ages, and hopes darken, the sources of annoyance, like evening shadows, only grow.

Perfectly nice e-commerce sites that already contain all I require now have annoying (disturbingly annoying) floating boxes letting me know that a live person is online to chat if I have any questions.  Holy weeping Madonna... Even the UPS online shipping that I have been using for many years now has the annoying floating box of chat-invitation.  Just get out of my way already!  Stop! Don't follow my cursor down the screen!  That's annoying!

Let me clue you in, Chat Invite Box Site Designer:  had I wanted to talk to a live person, I could have gone to a "store" or even picked up a "phone" or used a "link" on your "site" go send an email through your "contacts"!  Please just let me relish the anonymity and privacy of wandering through your e-commerce areas unmolested.  Please.

I know they are not listening.

Chevy Chase's 70th birthday.  The alumnus of the original Saturday Night Live cast has reached his three score and ten.

I try not to listen to the "financial report" on any news broadcasts.  All my life, the formula for these reports has been the same: false claims of causality.

"Stocks opened higher on a strong jobs report issued by the Labor Department..."

"Stocks closed lower on more bad news about Syria from the State Department..."

I've just never believed their causal links.  If stocks have been trending higher, it is likely because the dollar is weaker OR the corporations are building equity.  I don't think John Kerry's latest pronouncement affects the investment strategies of computerized trading algorithms.

Anyway that's just [ignorant] me.  File that under Crowndot's [non-] qualifications as a financial analyst.

What I really wanted to talk about is that I do not see the connection between a failure by Congress to raise the debt ceiling, and TEOTWAWKI.

I've been hearing a journalistic beating of the jungle drums to the effect that we need to raise (or entirely do away with) the debt ceiling or it will in fact be The End Of The World As We Know It.  For reals.

As in: Armageddon, Doomsday, Zompocalypse, and the Return of Disco, all rolled into one.

Some banks in China may experience the appearance of wet streaks down some blue serge slacks for a few days, but they will get over it.

Some upper levels of federal bureaucracy may sense a sudden fluctuation in the Force.  They will have to get over it too.

What WILL happen?  Hey, I've already established my credentials, so I'll come right out and say it:  I don't really know.

What I hope will happen is that some people -- ahem Democrats ahem -- will begin to face the reality that real cuts in spending must happen.  That's only The End Of The World As THEY Know It.

The digital information providers have done a pretty good job with flat maps.  Zoomable, up-to-date, streets or topography or satellite.  And there's always Wikipedia et al. to find out about odd countries.

But I miss having a globe.  For one thing, Alaska and Hawaii are a lot bigger on the globe than they usually look squeezed into corners of a U.S. map.  But I'm pretty sure our last globe still shows a huge green Union of Soviet Socialist Republics.  What the world needs is a computer peripheral touch-screen hemisphere globe that updates its maps as required, and would be fast-spinnable and stoppable -- "Ooh, I landed in the Indian Ocean."  Double-tap it, and the location would come up on your computer screen, all zoomable, etc.

Some day when I have nothing else to do, I need to find out how many countries have come into existence during my lifetime, and how many are still in existence.  This one, for instance.  And probably a ton of former colonies.

It's October First 2013!  The roll out of Obamacare is complete!  Right? 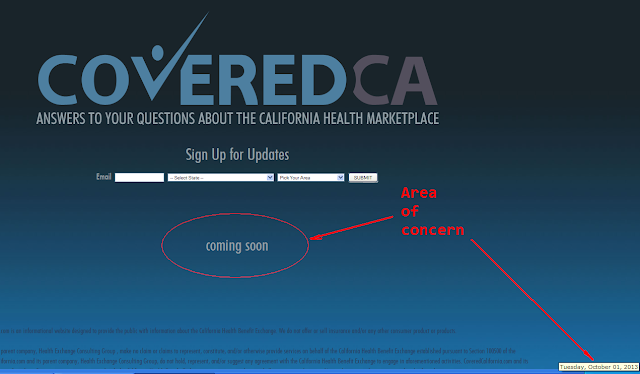 Covered California is the California version of the Obamacare "exchange" site.