In October of 2011, one of the first major excursions after my surgery was a slow walk up one of the local trails, where I happened to see a monarch butterfly caterpillar on California Milkweed (Asclepias californica). 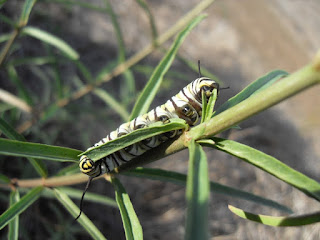 Yesterday on my muddy long run I passed the same place, where there is an expanding patch of milkweed on the hillside (good news for the monarch butterflies!). 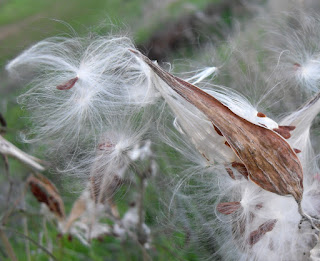 Does the rain act on the pod exterior to cause it to split when the seeds have the best chance for germination in moist soil?  It's all chemistry and physics and vectors and things, but behind it all there is -- isn't there -- the dearest wisdom, the most ingenious survival plan. 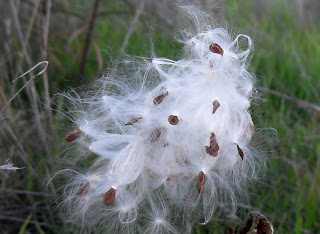 (The pictures embiggen if you click on them, in case you hadn't tried that.)
- - -
Update:  29 July 2014.  Since Attentive Reader Dgnativegirl (see comments) knows more about milkweed than I do, here's a link for Asclepias fascicularis. (That's what Mr. Monarch Caterpillar is on in the first picture, so it's probably what those seed are as well.)
Posted by Crowndot at 11/25/2012 09:01:00 AM