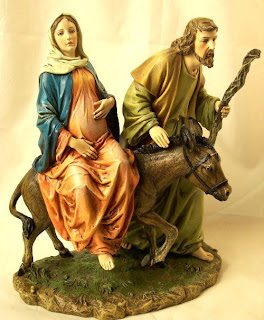 I have never accepted the opinion that Mary, by virtue of her Immaculate Conception, escaped all the aches and pains and inconveniences of human life.

Would she not rather,  like the Son she was chosen to bear, freely choose to undergo our trials and sufferings out of love for us, if not out of necessity?  So it is with all due respect that I consider the following.

I have had occasion to travel by car when my spouse was "great with child", as they say.  It's bad enough in a car.  The posture is all wrong, breathing and digestion are a challenge, and there better be a rest stop of some sort every fifteen minutes.

But on a donkey?!  I chose the image above (found by way of an images.bing.com search for "posadas") because Mary is visibly preggers.  Aren't they a darling couple?  Can't you see Joseph lifting her (them) down from and back onto that donkey?  Can't you see him finding a place and then guarding her so she can, um, powder her nose?  Can you imagine how much work it was to travel with a nearly-full-term woman?  Oh. Right.  You can.

I also do not particularly accept the idea of "Saint Joseph the (Communist Peoples') Worker."  That is too solidarist for me, and I'm more a subsidiarist kind of guy.  I prefer to think of San José as "Saint Joseph the Dreamer".  Matthew's gospel mentions three dreams of divine inspiration -- those are the ones we know of.

But in spite of all the "ins" Joseph had with God, The Big Guy somehow failed to call ahead for a reservation at any of the inns around Bethlehem.  God lets us sweat the details, I guess.  Something about freedom.

Random bonus thoughts:  The Roman occupiers of Judea remembered the hammering the Seleucids took from the Jews some time before.  I am sure I have read that the Romans did not look kindly upon Judean natives carrying arms.  But as a wood-shaper and carpenter by trade, Joseph would have been expected to have lots of pointy steel things in his possession.  Good choice for guardian of Mary and Jesus.  What would be more natural than for Joseph to be on hand to cut the umbilical cord when Jesus was born?  (I believe Jesus underwent natural birth, remember?)  So, think of it:  Joseph ties cord; Joseph wields a small blade; Joseph with the Most Precious Blood on his fingers...
A great miracle happened there.