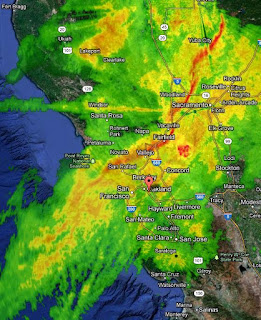 The picture is shot of the Weather Underground (I wish they wouldn't use that name) "Wundermap" at 7am 2 December 2012.  The orange streak is the heaviest rain.  We have had just about an inch of rain in the last 24 hours, and it's coming down hard right now.

Riding thus in the late summer along the Sierra foothills, one is constantly impressed with the climatic peculiarities of the region.  With us in the East, plant life seems to continue till the first frost; but in the Sierra foot-hills growth and active life culminate in June and early July, and then follow long months of warm stormless autumn wherein the hills grow slowly browner, and the whole air seems to ripen into a fascinating repose -- a rich, dreamy quiet, with distance lost behind pearly hazes, with warm tranquil nights, dewless and silent.  This period is wealthy in yellows and browns, in great overhanging masses of oak, whose olive hue is warmed into umber depth -- those are the conditions of the vegetation.


The same is true of the coastal hills at the same latitude, with the exception of the micro-climates so near the Pacific Ocean that the morning fog cools the day and waters the ground. For the most part there simply is no precipitation from May to October.  The grass looks dead -- this is the real reason, I think (and not the excitement in the second half of the nineteenth century over metal mining), for the enduring nickname of "The Golden State".