28 December is the memorial of the Holy Innocents slaughtered by King Herod in his attempt to nip in the bud a possible rival king.  (The story is told in the second chapter of the gospel of Matthew.)

It always comes down to that.  The need for power drives them to slay.  They want to consolidate, expand, perpetuate their power.  Solidify, justify and secure their power.  All those in favor?  Subjects.  All those opposed?  Enemies.

Enemies that at the beginning need only to be marginalized, but ultimately -- and the more successful the tyrant the easier it becomes -- to be eliminated.  Final solution. It is not a surprise or a shock to me that a Herod would employ such measures.  It goes with the exercise of his type of rule.

This day also calls to mind the flight of Joseph, Mary, and the baby Jesus into safe seclusion in Egypt.  An angel of the Lord appeared to Joseph in a dream to warn him to flee.  In this picture, the souls of the slaughtered babes accompany their flight. 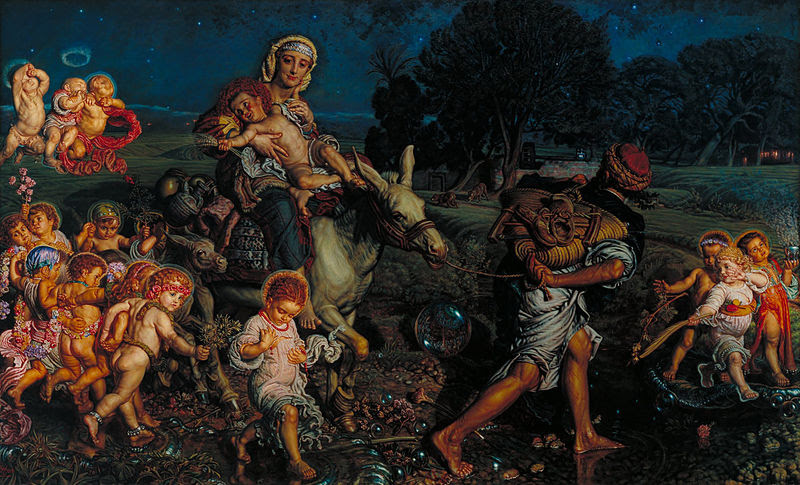 Triumph of the Innocents by William Holman Hunt


Then when Herod died, an angel appeared to Joseph again in a dream to tell him to return to the land of Israel.  Joseph must have believed that the new ruler was no improvement, because yet a third time Joseph is guided by means of a dream, and they end up moving to Nazareth.

I think what we need is a devotion to St. Joseph under the title of St. Joseph the Dreamer.  Would that all the people should have such a clear channel to the guidance of the Holy Spirit!