Once the fastest ship 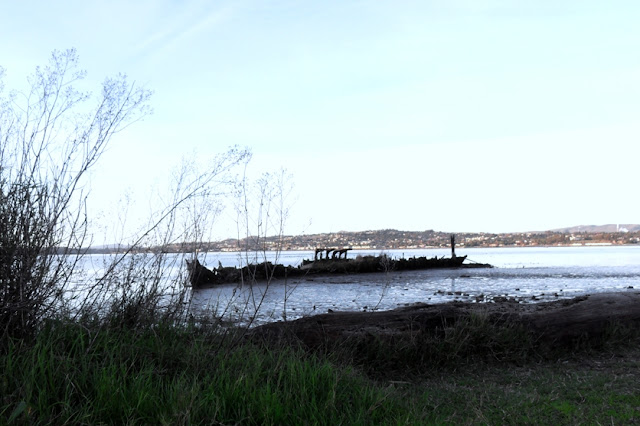 In local lore, the schooner Forester  (its remains are shown above) was once America's fastest ship.  Fastest ship in the world, some say.  It didn't make the Kessel Run in less than twelve parsecs, but apparently it made the run from Australia to San Francisco in record time shortly after the turn of the 20th century, using wind power!

Launched in November 1900 from the Hay and Wright Shipyards in Alameda, California (across the bay from San Francisco), the Forester took lumber to the other side of the Pacific Rim and returned with coconut meat (called "copra").  Here is an old newspaper photo (highly contrast-enhanced and edited by me) from time of launch: 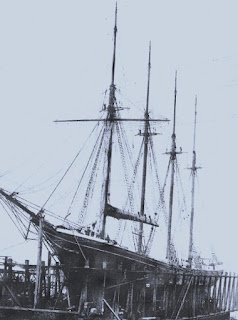 Lots of canvas-carrying capacity up on those masts!  Not much freeboard under load!  Here is a picture from the Martinez Historical Society:

That's lumber, stacked to what looks like a dangerous height and weight.  Maybe they just tied it all down and figured the whole thing would still float, even if every void filled with water?

By the early 1920's, what with all that newfangled steampunk paddle-wheel technology and all, the coal-smoke-belching vessels were carrying more cargo, faster than by sail.  That put an end to the full time commercial career of the Forester.

The formerly-fastest Forester did a stint from 1927 to 1931 as part of a floating breakwater during the construction of the Southern Pacific Martinez-Benicia railroad bridge, which was at that time the longest, heaviest double-track rail bridge west of the Mississippi River.

Capt. Otto Daeweritz was the only captain the Forester ever had. Some time after 1931, he had the vessel towed to anchor off Grangers' Wharf at the mouth of Alhambra Creek in northern Contra Costa County between Martinez and Port Costa, along what is now the Martinez Regional Shoreline park area.  Forester served as Capt. Daeweritz' home until his death on board in 1947.

The schooner remained in place.  It burned to the waterline in June 1975 in a fire the local gossip says was a fireworks accident, not deliberate arson.  The picture at top of this post was taken by me on 9 December 2012 during a solstitial new-moon extra-low tide.

The remains of the hull are disappearing gradually, to tide and storm, worms, and vandals.  At casa Crowndot, we usually refer to the Forester as "Martinez' slowest ship."